Apartment for Rent in Cebu

Basak, Lapu-Lapu
- located in TPI Homes II, General Aviation Rd, Basak, Lapu-Lapu City (in front of hangar)  - this is a gated subdivision with 24 hr security - this is a single house, not a townhouse so there's a lot of windows for natural light and cross ventilation - house consists of 2 units: one unit on the ground floor, another unit on the 2nd floor  Note: Ground floor unit is already rented. Only 2nd floor unit is avaialable - there's separate submeters for electricity and water for each unit - each unit has 2 bedrooms, kitchen, CR, living and dining area and its own main door and gate - has separate laundry areas for each unit - rent is P8k per unit  - walking distance to Indiana Aerospace University, Gaisano Grand Mall, Mactan Doctor's Hospital - MEPZ 2 and 3 are just 10 mins drive - popular beach resorts such as Mactan Shangrila, Bluewaters, etc are just a short drive away  - pls send me a message thru Lamudi or contact Riz Velasco.  Salamat.
₱ 8,000
2
Bedrooms
1
Bath
45 m²
Floor area
View Info
Contact Agent

Apartment for Rent in Mandaue City (Near Oakridge)

Capitol Site, Cebu
Pearl Homes (Rooms, Apartment, Penthouse For Rent) A wide variety of rooms and apartments to choose from. Ideal for families and working professionals. ROOMS AVAILABLE RANGING FROM 2,500-15,000. We have all types of rooms, from cheap and affordable rooms to high end types of rooms. - each rooms are customized; none of it will be of the same floor area, shape, bed, tiles, curtains and etc - with 24 hr security - safe - no curfew - all units have own c.r unless specified - clean and affordable - rooms are fully furnished - tenants are professional locals and/or foreigners (engr, md, rn, cpa, etc) - each room has its own entrance - accessible to public transport - with motor and car park - with internet access Walking distance to Chong Hua Hospital, Chong Hua Medical Arts, Vicente Sotto Memorial Hospital, and Fuente Osmena. 1 minute walk to City Soho Mall (with Gaisano grocery inside, 360 pharmacy, food stores, salons and etc.) LOCATION: Back of Chong Hua Hospital, Pearl Homes, Mirasol St. Capitol Site, Cebu City
₱ 4,000
10
Bedrooms
View Info
Contact Agent

Basak, Lapu-Lapu
-European inspired 3 unit apartment has 1 unit available for rent -located in Basak, Lapu-Lapu City -the vacant unit is located on the 2nd floor -the unit has 2 bedrooms, its own kitchen, CR, living and dining area  -it has its own balcony and an assigned parking space -it is located in a very nice and quiet neghborhood and is fully fenced and gated -walking distance to Mactan Doctor's Hospital, Gaisano Saver's Mart and Grand Mall -MEPZ 2 and Cebu Light Industrial Park is just 10 minutes away  -near the Mactan International Airport and famous beach resorts -just search "Venetian House" on google maps to see the exact location
₱ 12,000
2
Bedrooms
1
Bath
80 m²
Floor area
View Info
Contact Agent

Room with own A/C & Toilet and Bath

Banawa, Cebu
Rooms located within Cebu City with 24 hours CCTV, fire extinguisher, aircon, drying area for clothes, free water and individual electricity meter. The rooms are provided with a bed and cabinets. Room price vary depending upon the room type whether it has own bathroom or not. Price ranges from 4,500 to 10,000 depending upon room type.
₱ 4,500
1
Bedroom
1
Bath
View Info
Contact Agent

Maribago, Lapu-Lapu
FREE 50 Mbps wireless Fiber Internet.Suitable for call center staff needing to work from home.Small sized studio type A/C room, suitable for 2 people with kitchenette, so you can do your own cooking and cooking utensils and bar fridge.  You will have a private bathroom with hot shower. Electricity payment by room meter @ 18 Pesos per kw/hour.We have a cool guest lounge upstairs to hang out, watch cable t.v. or enjoy our meditation space. Free washing machine in rooftop area.5 minutes to Mactan New TownAll Main Diving Shops & Resorts are nearby. One jeepny ride to Shangri-La Resort.Long term guests and Ex-Pats can negotiate a discount.
₱ 6,000
1
Bedroom
1
Bath
15 m²
Floor area
View Info
Contact Agent

Estaca, Compostela
new built house in estaca compostela cebu.room and bed space for rent and a room with bed and foam included good for 2 person.free use sa kitchen utensils..to use a stove for 100 pesos per month.we can do short term rental for 1000 pesos room per week free electric fan and stove ..the house is very close to the ocean and a swimming pool.
₱ 500
4
Bedrooms
2
Baths
70 m²
Floor area
View Info
Contact Agent

Bedspace near near Taboan Public Market Cebu for Rent

studio type for rent in guadalupe

Room for Rent Near JY Square / IT Park

The Central Province that Rivals the Capital

The majority of Cebu Province is located on Cebu Island. The island is linked to the rest of the country via the Nautical Highway System (which includes highways, ferries, and bridges) and the Mactan-Cebu International Airport on Mactan Island. Geographically, it is a central province with the Negros Provinces to its west, Bohol and Leyte to its east, Siquijor to its south, and Masbate to its north. It is the main hub of the entire Visayas region and is second to Metro Manila in terms of economic and strategic importance.

Aside from being a tourist destination, Cebu is also a popular business hub. With low operating costs and a supportive government, many companies are relocating, basing themselves, or setting up a branch in the province. The term “Ceboom” is now a term used to describe the province’s rapid economic development. It comes as no surprise then that the residential and commercial real estate sectors are the fastest growing sectors in the province. The number of developments in the province are increasing - houses, shopping malls, condominiums, hypermarkets, etc.

Apartment for Rent: Cebu and Its Heart and Soul

As more people are opting to live in Cebu, the price of residential real estate is increasing. This means that not everyone who wants to relocate to the province can easily afford to buy a residence. This is where apartments for rent in Cebu come in.

Arguably, the best place to find a Cebu apartment for rent is in Metro Cebu. Made up of seven cities and six municipalities, it is the center of the province’s activities. The following are the most popular cities that are part of Metro Cebu. 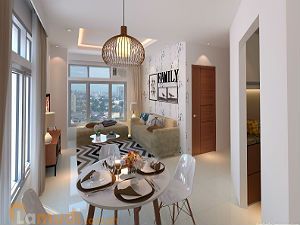 Cebu City (pop. ~866,000) - the heart of the province. The name Cebu translates to “trade” and is a reflection of the city’s importance as a commercial center for hundreds of years. The city is still the center of commerce of the province and was ranked 8th in the world on the “Top 100 BPO Destinations Report” by Tholons, an advisory firm for Global Outsourcing and Research.

Lapu-Lapu City (pop. ~350,000) - if Cebu City is the heart of the province, Lapu-Lapu is its soul. Several famous landmarks are found here, including the Lapu-Lapu Shrine. The shrine is dedicated to the Philippines ’ first national hero, the warrior chief, Lapu-Lapu, who defeated the Spanish invader, Magellan. It is known as a more tranquil alternative to the relatively hectic lifestyle of the city center.

Mandaue City (pop. ~330,000) - bordering Cebu City in the north, Mandaue is highly urbanized and more affordable than Cebu City. It is home to many historically and geographically interesting areas, such as the Monkey Caves and the National Shrine of Saint Joseph. It is a new tourist destination where the yearly Mandaue (or Mantawi) Fiesta is celebrated.

A typical studio-type and one-bedroom apartment for rent in Cebu that can accommodate solo renters and newlyweds have a monthly rental fee ranging from PhP 4,000 to PhP 20,000. Bigger units that have two to four bedrooms have a rental fee of PhP 25,000 to PhP 52,000.

Find Other Properties in Cebu