House and lot For Rent in Dasmariñas, Metro Manila

C.O.J. Realty
C.O.J. Realty
Member Since 2014
COMPANY PROFILE Our sincerest greetings! May we introduce our realty office, C.O.J. Realty, which was founded on April 15, 1983. The company specializes on selling & leasing of residential, commercial & industrial properties nationwide and abroad. For a brief profile, C.O.J. Realty is a member of Pasay-Makati Realty Board, Inc. a local board under the umbrella of Philippine Association of Realtor’s Estate Board, Inc. (PAREB), the national real estate entity in of the Philippines Our Address : 16th Floor Tower 6789 6789 Ayala Avenue, Makati City Philippines 1226 Our Motto: Teamwork divides the effort and multiplies the effect for God’s glory! Our primary aim is to render service to our clients with quality, competence, integrity and reliability because our credibility is our foremost measure of success.

AList Properties
AList Properties
Member Since 2020
Welcome! A- List Properties provides quality assistance and service to those looking to buy or rent property, particularly along the 6 exclusive residential villages in Makati, Metro Manila: Forbes Park, Dasmarinas Village, Urdaneta Village, Bel Air Village, San Lorenzo Village and Magallanes Village. We have COMPLETE listings from beautiful, elegant and modern houses to old, rundown houses for renovating according to your taste, as well as vacant lots. NOTE: Prices and availability of the properties are subject to change. We provide updated listings upon request. The areas where we specialize in for sale: Forbes Park Makati Dasmarinas Village Makati Urdaneta Village Makati Bel Air Village Makati San Lorenzo Village Makati Magallanes Village Makati For viewing purposes or inquiries, you may contact us.

Dasmariñas, Makati
Welcome to this beautiful Mediterranean-inspired villa! If you prefer a home that exudes a certain dignified air, that is timeless and elegant, with gorgeous narra floors and beautiful wooden accents throughout, generous indoor and outdoor space, then this classy home may just be what you are looking for. This house may look quite grand but does not feel intimidating. With a total of 4 bedrooms, a big office/den, formal living and dining rooms, a country-style inspired family kitchen, a big porch overlooking the sprawling garden and pool, this home truly offers more than enough space for comfort and relaxation, family bonding, indoor or outdoor entertaining, and working or studying from home as needed. QUICK DETAILS: · Split-level bungalow, newly-renovated · Lot Area      :  approx. 1,478 sqm · Floor Area   :  approx. 600 sqm · 3 Bedrooms with en suite bath at upper level · 1 Guest room (with separate entrance) with bathroom and kitchenette · Big office/den with powder room · Formal living room with access to the lanai · Formal dining room · Very spacious lanai/porch · Family kitchen · Auxiliary kitchen/utility area · Big swimming pool · Big garden in the backyard and in front yard · Maids’ room and bathroom · Driver’s room and bathroom · 2-car Garage plus 8 in driveway area · Property comes with air conditioners Note: Property details are deemed reliable but not guaranteed, and are subject to verification. PRICE and TERMS: PHP 400,000.00 rent per month + VAT 12 months advance rent, 2 months security deposit Minimum of Two (2) Years contract.  Longer term preferred. Note: Price and availability are subject to change. Please contact us for the updated status. Please contact us for more listings. Property showing can be arranged for serious, direct tenants. Please contact me. Thank you. DASMARIŇAS VILLAGE in Makati City is one of the most exclusive and well-secured residential estates in Metro Manila, Philippines. In this village live many of the country’s wealthiest families, foreign dignitaries, and expatriate executives of top companies. Within 5 to 10 minutes’ drive from this subdivision is the Ayala Business District, home of top corporations’ offices, major shopping centers, 5-star hotels, and other cosmopolitan lifestyle amenities and facilities. Also nearby is the Bonifacio Global City (Taguig City), touted to be the most modern and skilfully-planned business and residential district in the country. An exclusive school, Colegio San Agustin - Makati, is located inside this Village. And within minutes away from the subdivision are various international schools and other prestigious educational institutions. For medical emergencies, top hospitals St. Luke’s Medical Center and Makati Medical Center are several minutes away.
₱ 400,000
4
Bedrooms
600 m²
Floor area
1478 m²
Land Size
View Info
Contact Agent

Dasmariñas, Makati
The split level house has a very spacious space in the front, side & back with large area for entertainment. It has a circular driveway with 2 gates.
₱ 220,000
3
Bedrooms
500 m²
Floor area
900 m²
Land Size
View Info
Contact Agent

Dasmariñas, Makati
This house and lot for rent with a lot area of 1450 sqm is located in Dasmariñas Village, Makati. This unfurnished property features 5 bedrooms and 5 bathrooms. It also offers convenient access to lifestyle options and alternatives for relaxation and enjoyment for individuals and families in a progressive neighborhood.
₱ 260,000
5
Bedrooms
650 m²
Floor area
1450 m²
Land Size
View Info
Contact Agent

Dasmariñas, Makati
This house and lot for rent with a lot area of 850 sqm is located in Dasmariñas Village, Makati. This semi-furnished property features 5 bedrooms, 5 bathrooms, and 3 parking spaces. It also offers convenient access to lifestyle options and alternatives for relaxation and enjoyment for individuals and families in a progressive neighborhood. Potential home buyers can expect to enjoy a beautiful garden.
₱ 320,000
5
Bedrooms
640 m²
Floor area
850 m²
Land Size
View Info
Contact Agent

The Philippines’ Most Prestigious Address 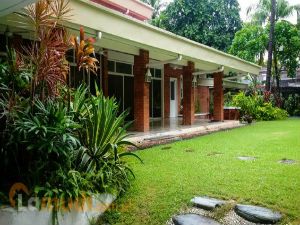 Occupying 187.21 hectares and one of Makati’s (and indeed the Philippines’) most exclusive subdivisions, the sprawling houses and bungalows along the tree-lined streets of  Dasmariñas Village are homes to diplomats, businessmen, and some of the country’s most high-profile families.

Developed in the 1960s by Ayala y Companía, the forerunner of today’s Ayala Corp., Dasmariñas Village, or sometimes referred to simply as “Dasma” was originally conceived to be part of the equally exclusive Forbes Park from which it was separated from in 1971. The village is now also coterminous with Barangay Dasmariñas, which according to the 2010 Census has a population of more than 5,500 inhabitants.

Living in an Executive Neighborhood

A  Dasmarinas Village house for rent or for sale gives residents a much-welcome respite from the hustle and bustle of Makati, the Philippines’ business and financial capital, without having to travel too far. Indeed, the village is situated just across Epifanio de los Santos Avenue (EDSA) from the Makati central business district (CBD), while a few minutes’ drive east through McKinley Road is Bonifacio Global City (BGC), the country’s second most important CBD.

The village’s streets are lined with old acacia and tamarind trees, while its parks and greeneries are impeccably maintained. Just outside the village gate is Sanctuario de San Antonio, a church plaza surrounded by commercial and retail establishments, while along Palm Avenue is Colegio de San Agustin, a private co-ed Catholic school founded by the Order of Saint Augustine in 1969.

Opting for a House for Rent in Dasma 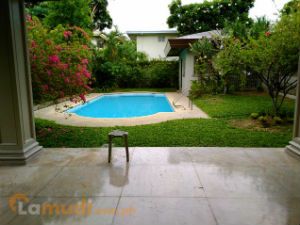 As expected, a house for rent in Dasmarinas Village falls under the pricier side. Data shows that a house for rent in the village may command a monthly rate of between PHP 250,000 and PHP 700,000. Although quite expensive, these houses are known not to scrimp on amenities: most have their own swimming pools, have sprawling and well-manicured gardens, have a minimum of four bedrooms, and have top notch fixtures and finishes. Not to mention that being a resident of the village affords one easy access to Makati CBD and BGC, and car stickers will grant them access to the neighboring villages of Forbes Park, Urdaneta Village, and Bel-Air Village.

Being one of the most prestigious addresses in the country, it is not surprising that diplomats and expat employees of multinational corporations choose a house for rent in Dasmarinas Village, Makati as their home in the Philippines. Many local property investors own houses in the village not for their own use, but to be used as investment properties for rental income.

Being in one of Makati’s most prime locations, the value of properties in  Dasmariñas Village is expected to increase over time.

Find Other Properties in Dasmariñas